Posted: May 09, 2018 Under: Uncategorized By admin no Comments 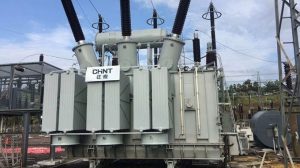 A HIGH-powered delegation from Chinese electrical engineering giant, CHiNT Electric, is expected in Harare this week for high level discussions with Government and Zesa aimed at unlocking funding for the 100-megawatt Gwanda solar project.

This comes as it emerged that President Mnangagwa’s recent State visit to China, his first outbound trip out of Africa, had re-opened avenues for lines of credit, which China had cut over arrears on earlier State guaranteed loans.

China Export and Import Bank (China Eximbank) has affirmed its commitment to fund the Gwanda solar project, including issuing an advance payment guarantee of $52 million to secure release of part of the contract funding.

The visit also comes following concerns generated by delays to the implementation of the Gwanda project, which caused a furore in Parliament and among the public amid fears of potential prejudice of public funds released for the project.

CHiNT’s delegation will be in Harare for at least three days to renegotiate some of the terms of the Gwanda solar project contract rendered incapable of performance due to delays in settling premium arrears to Sinosure, a State insurer for the majority of outbound loans by China.

In a correspondence to Zesa seen by The Herald Business, CHiNT Vice President Li Bosheng said the meetings were meant to discuss matters requiring urgent attention to unlock funding for the Gwanda project, which at one point appeared to have gone off the rails.

“CHiNT communicated in its earlier correspondence dated April 10, 2018 that it was ready and willing to secure advance payment guarantee, being 30 percent of the (engineering procurement and construction) EPC contract price ($130 million),” Mr Bosheng said.

“This is a condition precedent in terms of Clause 5 of the Contract Agreement, which inversely obliges (Zesa subsidiary) ZPC to immediately pay the contractor the equivalent amount as secured by the guarantee ($52 million).

“This position remains and it is therefore important for the parties to discuss the modalities of how the payments will be made by ZPC to initiate and or complete phase 1 of 26,4MW on site,” Mr Bosheng noted.

CHiNT is the foreign technical partner of Intratrek Zimbabwe in the 100MW Gwanda solar farm project, which was put to tender by the Zimbabwe Power Company (ZPC).

The $30 billion asset Shanghai Stock Exchange listed CHiNT, which turns over $12 billion annually, said its inability to secure funding for the project from China Eximbank, as originally planned, was a result of pending premium payments to Sinosure by the Government of Zimbabwe.

“We are, however, delighted to advise that subsequent to the recent visit by your President, His Excellence Mnangagwa to China, various meetings we held with China Eximbank and Sinosure paid great dividends.

“From these aggressive engagements, Sinosure has given us positive indication of its commitment to re-engage the Zimbabwe Ministry of Finance in order to agree on how the outstanding arrears will be cleared,” he said.

Zimbabwe is pursuing solar projects among a cocktail of interventions by Government to bridge the current power deficit with demand, at peak periods, of 1 600MW outstripping generation of 1 100MW. The gap is met through imports.

Solar is seen as a low hanging fruit to close the power deficit.

The visit by the CHiNT delegations comes after the period for satisfaction of conditions precedent expired on October 23, last year, and to date, no amendment to the EPC contract for the Gwanda project, which CHiNT and Intratrek won as the lowest bidder to specification.

“In observation of this regard, we request to negotiate for an extension of the CPs (Conditions Precedent) satisfaction period by a reasonable period (24 months), which will hopefully enable the Government of Zimbabwe to settle premium arrears with Sinosure,” Mr Bosheng said.

However, although the period for the satisfaction of conditions precedent had lapsed, CHiNT said it was aware of an addendum to the contract agreement signed between ZPC and Intratrek in September last year to allow for expedited execution of the pre-commencement works.

“CHiNT’s reading of the contract and assessment of ZPC’s conduct indicates that the parties have continued to perform their respective contractual obligations notwithstanding the expiry of the CPs satisfaction date.”

Nonetheless, Zesa and its power generation arm ZPC were tied by provisions of the contract, which forbid declaration of failure to fulfil conditions precedent by a part that is liable for the delays given the effect of the arrears to Sinosure.

On the controversy due to delays in completing the initial phase of the project, CHiNT said it was ideal for all issues to be resolved amicably, adding that as informed by its experience in the industry, high capital projects such as Gwanda inevitably attract criticism and public outrage.

The Chinese company will also seek to discuss, during the visit, the alternative of raising part of the project funding locally, as recommended by Finance and Economic Planning Minister Patrick Chinamasa last year.

The minister directed CBZ Holdings to float energy bonds to be subscribed to by insurance and pension funds. To make the energy bonds attractive to the investors Minister Chinamasa granted the bonds liquid and prescribed asset status. The alternative was supported by the State Procurement Board, reconfigured to Procurement Regulatory Authority of Zimbabwe.

CHiNT contents raising part of the funding locally will also make repayments easier given the foreign currency crisis in Zimbabwe. It also said it had taken a quick strategy to achieve financial closure by agreeing to reduce the EPC contract price from $172 million to $130 million, a 20 percent reduction. ZPC and the then SPB endorsed the proposal, made possible due to falling cost of installing Solar PVs globally on the back of changes in technology.

CHiNT will implement the Gwanda solar project in phases of an average of 25MW to compensate for lost time and for quick turnaround, Mr Bosheng said in the letter, copied to Energy Minister Simon Khaya Moyo, Finance Minister Chinamasa and Zesa group chief executive Josh Chifamba.