Posted: June 11, 2018 Under: Uncategorized By admin no Comments

We are used to solar panels which can harvest power from sunlight during the day. But how about a new type of solar cell that is able to generate power from raindrops, even when the rain falls in the middle of the night? Yes, it sounds impossible, but it’s actually just been demonstrated by researchers at China’s Soochow University. 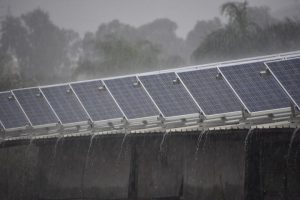 The new type of solar panel incorporates a triboelectric nanogenerator (TENG), a means of converting mechanical energy, aka motion into electricity.

“Solar cells have become one of the most widespread solutions in the crisis issues of the environment and energy,” Zhen Wen, an assistant professor in the Institute of Functional Nano and Soft Materials at Soochow, told Digital Trends. “However, the power generation from a solar cell is affected by various weather conditions — for example, rainy weather. The intermittent and unpredictable nature of solar energy is an inevitable challenge for its expansion as a reliable power supply system. Scavenging alternative energy from the environment with different types of energy harvesters, to compensate for the insufficient part, is urgent.”

Wen notes that the concept of creating a combined solar cell and triboelectric nanogenerator was first proposed by researchers at Georgia Institute of Technology in a paper published in 2015. This work moves the concept on, though, by creating a true hybrid device, rather than simply putting a nanogenerator on a solar cell. Instead of a chunky creation made up of two independent energy harvesting units, this is a true double-sided solar panel capable of adding a 10 percent boost in overall output. Because solar panels generate just a fraction of their regular output when it’s raining (and pretty much nothing when the sun’s not out) it could solve one of the biggest challenges faced by solar power.

But you may be waiting a while until you can actually use one on your house. According to Wen, a completed full-size prototype could be up to half a decade away, after which it would no doubt take some time to actually come to market. Still, by then it may be even more effective.

“We are very confident that our device can [also] harvest wind energy if we slightly modify our TENG nanogenerator structure, because TENG can various mechanical energies form environment such as wind into electricity,” Wen continued.